Known as "The Painter Of Light", Thomas Kinkade said that he wanted to make people happy in the way of Walt Disney and Norman Rockwell. He was one of America's most collected living artists until his untimely death at 54.

He was a painter of realistic, pastoral and idyllic subjects, sometimes containing concealed images of real people including Norman Rockwell, who he knew and admired, and other people. 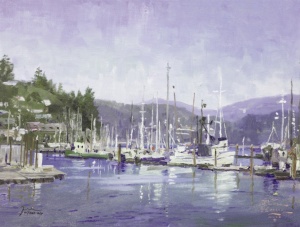